ARBuildJunkie recently spoke with Payton Smith of Wheels & Weapons about his love for the AR platform, and the gear he acquired to adapt and overcome the challenges he faced on the path to once again be able to enjoy shooting and hunting.

Q: Can you talk about your first experiences shooting when you were growing up?

Payton Smith, Wheels & Weapons – The first time I shot a gun, I was six years old. My dad was into hunting and got my brother and me into it. I grew up hunting deer and turkeys here in Missouri. As I grew older, I started to bow hunt. My brother and I got into waterfowl hunting…but after my accident, I didn’t know that I’d ever be able to shoot again until I found the Be Adaptive mount, which completely changed my world. Being able to shoot and hunt and do something that I’ve loved since I was a little kid is an amazing thing.

Q: Can you describe the accident?

Payton Smith, Wheels & Weapons – I turned 21 in 2015. I was not the man that I am today. I was very irresponsible. I did a lot of partying and made really dumb decisions. One night, I drank quite a bit and decided that I would drive home. It wasn’t the first time and probably would not have been the last. I ended up crossing the center line and rolled my truck.

I was ejected and broke my neck at the C4 level…and so, the first year and a half after my accident, it completely changed me. I was trying to get to my new normal and just learn how to live again.

At that point, I totally expected that I would get better. I had renewed my faith in God and just knew that I was going to get better. Well, after about a year and a half, I had barely made any progress at all. I knew that I was getting far enough out from my injury that I wasn’t going to make a full recovery like I had fully expected to. That sent me into a very deep depression. I felt like God didn’t really care about me anymore, as I had prayed so hard to get back to normal…that was my main goal. If that wasn’t going to happen, I honestly did not want to live.

I was in such a depressed state that I was suicidal…it was just a bad time in my life. After another year or so of being miserable, I decided that I didn’t want to live miserable anymore.

I realized that it wasn’t what God wanted for me. I felt like he had a different plan. I had no real way of knowing why he didn’t choose to heal me, but I decided that I was going to live the best way that I knew possible and do the things that I could still do, and be thankful. So, I got back into hunting and doing a lot of shooting, which really brought me out of my depression.

Today, I really just want to share my story, because I want to show people how God helped me, and I want to demonstrate to people why drinking and driving is just such a mistake. You might think that you’re good, but this can happen to you. I want to express that to people. Finally, I want to show people who are in wheelchairs or who have other disabilities that they can get out there and do whatever you put your mind to. It may be harder, and it may be different, but where there is a will, there is definitely a way. (pauses)

If I may, I’d like to go back and touch on something before we go forward.

Payton Smith, Wheels & Weapons – I was talking about how my accident was due to drunk driving. I used to be very ashamed when I told people that. I felt as though there were lot of people who are injured or sick who don’t deserve it at all, whereas I feel like I was kind of asking for it.

At the same time, I feel driven to show people that once you are injured, life goes on. There are so many resources out there for the disabled community. Anything that you want to do, you can get out there and do it. Shooting, in particular…It’s therapy and huge stress reliever…and the world just kind of melts away. You don’t think about your problems. You can forget about everything and just focus on shooting, doing something that you truly love.

Q: What are your favorite firearms right now?

Payton Smith, Wheels & Weapons – I have a 20” Larue OBR PredatAR that I shoot a lot. It’s just fun. I bought it to shoot 500 yards or more, but I’m not quite that good yet. With my mount, if I shoot a gun with a lot of recoil, I find that my follow-up shots are not very fast at all. As such, the 5.56 is definitely my go-to for target shooting.

I also have a Daniel Defense Ambush 6.8 that I just got that I am going to use for my deer rifle. I’ve applied to go on some hunts in Wyoming for antelope, and I was thinking of using that gun there. But really, even just plinking with a .22, is therapy for me.

I just love getting out there and shooting, especially with ARs, as they work well with my scope camera and my shooting mount, plus I cannot eject a shell if I was shooting a bolt action…because of that, the AR platform is what really has my interest.

Q: Can you walk us through the platform you use to shoot from?

Payton Smith, Wheels & Weapons – The company that makes my shooting mount is called Be Adaptive, and my mount is the Be Adaptive High Quad Shooting Mount…They have all kinds of adaptive equipment for any range of injury.

On my setup, there is a plate with a piece of tubing welded to it. The plate slides underneath my seat cushion, and then there is a post that sticks down into the tubing. You screw in a set screw, and the mount actually sits on top of that.

To aim, Be Adaptive also has a scope camera, but it is really expensive, so I found one by a company called Satcomm that actually has infrared capabilities as well. It’s very clear, so the camera looks through the a Vortex Diamondback 6-24 scope, and it has a screen on top, so it shows the reticle and what the scope is looking at.

There is a joystick up by my chin, and I use my chin or mouth to push the joystick to aim while I look at my scope camera screen, and then when I am ready to shoot, there is a little actuator that goes inside the trigger guard, up against the trigger. When I am ready to shoot, there is just a little straw that I suck in on. I suck in, and it pulls the actuator back, and the rifle fires. It’s amazing.

Once I found out about it, I just couldn’t believe it. I can recall being back in the hospital laying in bed, thinking about all of the things I wasn’t going to be able to do anymore, hunting and shooting was the first thing that I thought about. Once I found out about this equipment, I knew that I had to have it.

Today, due to my setup, shooting is just such a big hobby for me, even much more so than before my accident. I shoot my 5.56 all the time, and I just love to shoot. I still love to hunt as well…I go on managed handicapped hunts, and I love it. But even simple target practice for me is just something l love so much. I get out there and clear my head. I don’t have to worry about anything. It’s just therapy for me to send some lead downrange.

That said, I am still learning as well. My mount is not as stable as I would want, so it all comes down to breathing, but in a way, that’s just like anyone else. I take a breath, slowly let it out, and when I am ready to shoot, I just suck in on the straw. I’m pretty decent at 100-150 yards, but I want to be better and be able to shoot a long ways further.

Q: If people want to follow you on your journey, where can they go?

Payton Smith, Wheels & Weapons – I have the Wheels & Weapons Facebook page and an Instagram page @wheels_and_weapons, and I am also planning on starting a YouTube channel to show tips and tricks for disabled people, along with reviews on different weapons and products. Really my goal is just to get my story out to as many people as possible and show them that no matter their challenges, they can still do whatever they want. If anyone has questions, or if someone is interested in getting back outdoors but does not know just how to do it yet, that’s what I made the pages for. I want people to ask, and I’ll help out in any way that I can. I want them to know that whatever they are up against, they can do whatever they can set their mind to. 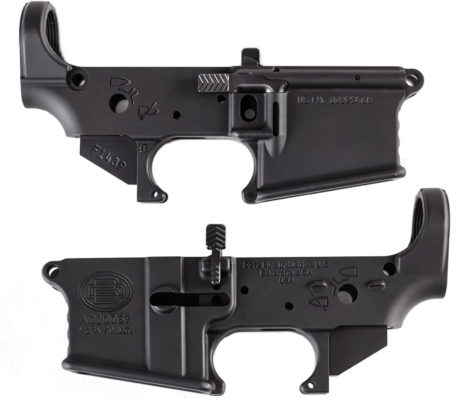 Discount Code: FURNITURE12
Get it at AR15Discounts.com

Discount Code: BCG15
Get it at AR15Discounts.com