We sat down with Russell Phagen, Sales & Marketing Director at KE Arms, to discuss the recent launch of the KP-15 Monolithic Polymer Receiver, which is touted as an easy-to-produce, durable, and lightweight alternative to traditional aluminum lower receivers.

Q: Can you give readers who may not be familiar the basics about KE Arms?

Russell Phagen, KE Arms – KE Arms is first and foremost a manufacturing company. The owners have decades of experience in the automotive industry. They got into firearms in 2012 during a time of then-unprecedented demand, and the thought was that they could apply their industry resources and manufacturing know-how to the firearms industry.

Over the past eight years, KE Arms has been increasing its manufacturing capability in the firearms industry. Their primary products are aluminum AR receivers, lower parts kits, match triggers, and rail systems.

The monolithic polymer receiver concept is nothing new. Colt had experimented with it in the 1970s. By monolithic, I mean it is a design that incorporates the pistol grip, buttstock, and buffer tube into the receiver. Colt had made a receiver that was molded in two halves and then bonded together, but it wasn’t very robust due to the technology available at the time.

In the early 2000s, a company called Calvary Arms, which I worked for from 2001 to 2010, introduced the CAV-15, which went through several different iterations. The company had some legal problems, and assets were broken up and sold.

In 2019, we saw the large demand for feature-rich monolithic polymer receivers generated by InRange TV and their “What Would Stoner Do?” project. We knew that what we could potentially offer would have several benefits, including production speed, weight, strength, and durability compared with other polymer designs. As such, KE Arms put together an investor group and has worked with Brownells and InRange to bring the KP-15 Monolithic Polymer Receiver to the market.

Q: I can imagine a lot of builders are hesitant to trust polymer. Can you address why this is something that KE Arms felt was worth pursuing with the KP-15 Monolithic Polymer Receiver?

Russell Phagen, KE Arms – As I mentioned, one benefit is the speed of production. This mold can produce a receiver every 65 seconds. In contrast, a completed aluminum receiver has about 40-45 minutes of labor; a completed KP-15 Monolithic Polymer Receiver has about five to six total minutes in each receiver for production completion. This includes incorporating all of those sub-parts that would typically be made separately and need to be installed. It’s a huge benefit.

There is also a weight saving over a traditional receiver that is configured similarly. I think we’re saving about half a pound, but that might vary slightly based on features versus a Mil-spec lower.

Another benefit of the KP-15 Monolithic Polymer Receiver is its strength. Polymer has some resilience in ways that aluminum does not. It can bend and flex-back into shape. It can survive things like drops and being run over, where an aluminum receiver might bend and be permanently out of action.

What makes our receiver different from other polymer receivers on the market is incorporating the buttstock/buffer tube/pistol grip/trigger guard into the design…making it far more robust than doing all of those different components separately. I know that polymer receivers have left a bad taste in people’s mouths. However, that’s when they are designed poorly, meaning they were designed to exactly mirror existing aluminum receivers. Even with metal inserts, there are common fail points on those designs around the buffer tube, around the takedown pin, because the bolt carrier/buffer system’s cycling puts downward stress on that area. 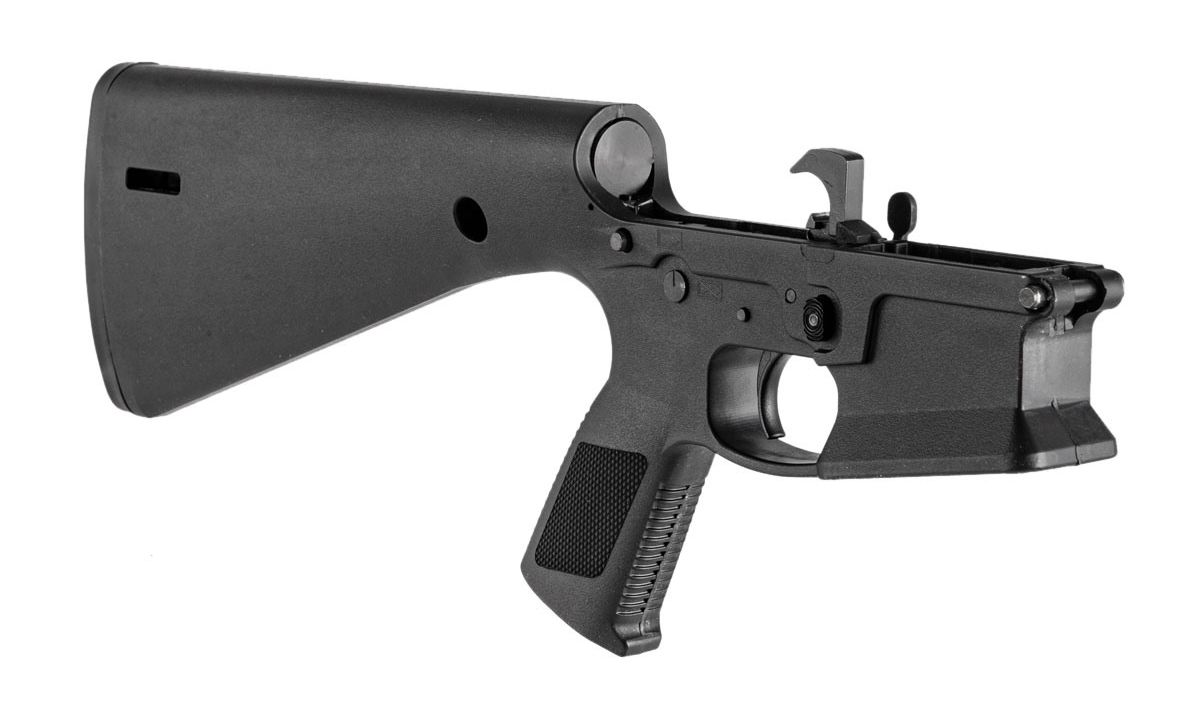 199.99
at Brownells
Prices accurate at time of writing
View Details

The KP-15 Monolithic Polymer Receiver does not have that issue or have those sorts of fail points. It was developed from the ground up to be what it is, with the correct parts, proper materials, and potential fail points eliminated.

As far as durability goes, it’s going to hold up just as well as an aluminum lower. We did a torture test video for RecoilTV where we did push-ups on it, did pull-ups off of it, butt-stroked it off of a very solid wood post, and we ran it over with a Bronco. That gun still works, and I just shot a match with that same rifle the following week.

Q: Let’s say I like the lower, but I have my own ideas for an upper. Can you talk about compatibility with other uppers on the market?

Russell Phagen, KE Arms – Compatibility with other uppers is basically 100 percent, with the exception of big-bore calibers like .458, .50 Beowulf, 450 Bushmaster, .50 BMG…I list those only because I am never going to shoot those calibers enough to be able to tell your readers how they will hold up long-term. I’m not going to burn 1,000 rounds of .50 Beowulf through one of these lowers and see what happens to it.

I would note that it is important to use the appropriate buffer for blowback systems. For 9mm, a minimum of 5.4 ounces, .45 a minimum of 8 ounces…if you don’t use a heavier buffer with blowback systems, it will cause damage to the lower. It would also cause damage to an aluminum lower under the same circumstances. The damage would just manifest itself a bit differently.

Q: Can you talk about the different versions that you currently offer of the KP-15 Monolithic Polymer Receiver?

Russell Phagen, KE Arms – We offer three different complete versions through Brownells and our website as well. We have a basic Mil-spec configuration that has a Mil-spec fire control group. The selectors are modified so that they are easier to remove. Something to be aware of is that the selector spring and detent loads from the top, and then the selector slides over it. We have a modified Mil-spec selector that we sell, as well as an optimized ambi selector. The receiver will work with existing fire control parts, but removing them can be a problem. It’s a gunsmith operation versus an end-user process. We recommend that people use our Mil-spec or our optimized ambi selector that is easier to remove from the KP-15.

Another thing to be aware of is that the receiver’s hammer pin area is wider and reinforced to absorb the impact of the hammer going forward. Now, you don’t need to use a longer hammer pin. That said, we do make all of our own fire control components, including a longer hammer pin. We find that it looks better aesthetically with the pin flush on either side of the receiver, and people are more confident in installing it. If you use a traditional hammer pin, it will be recessed on both sides.

Q: How has the reception been so far?

Russell Phagen, KE Arms – This has been the most successful pre-sale that Brownells has ever done. There are hundreds of rifles sold, and there were 20,000 KP-15 Monolithic Polymer Receivers pre-sold. There is a ramp-up period, and we’ve hired a bunch of people, and we’re training them up on how to process and assemble these, but once we’re going full speed, our goal is to ship hundreds, up to a thousand a day, should we need to meet demand. That is the most significant advantage of this production system, particularly in the current marketplace, where we face political uncertainty. Nothing else can produce receivers as fast as what we are doing, particularly when aluminum forgings and billet are difficult to procure.

Russell Phagen, KE Arms – This product was designed to be the best polymer monolithic receiver it could be today. We worked with various experts regarding molding, mold design, materials, vibration welding, and our internal design staff. The result is we have an effective, durable product that meets the vast majority of shooters’ needs. Sometimes we get questions on why we did things a certain way but rest assured that we have thought through every potential outcome and situation, and there is an excellent reason why this receiver is designed the way it is.

How will the polymer lower handel a catistropic failure? Glocks don’t do as well as metal frame pistols, so will these receivers splinter instead of containing the force as a metal receiver will do during a catastrophic failure??

I would buy one in a heartbeat but LOP is 13 I need 12 especially with BA. If you like good old fashioned A1 this is the ticket!