One of the most frequently asked questions in AR-15 groups or boards is, “What AR-15 buffers should I consider for my build?” The answer is not always as simple as someone would like, as several factors will determine the proper buffer. Complicating the process is the fact that many who are new to the AR platform don’t quite grasp what the buffer system does or how it works.

Add to this confusion is the sheer amount of aftermarket buffers, springs, and complete buffer systems. Today, you have an almost overwhelming variety of options. The goal here is to explain how the buffer system works, give some information on which AR-15 buffers and buffer springs are typically best for different setups, and review and explain some of the aftermarket options.

As with anything else in your gun, do your homework before you start swapping out AR-15 buffers and buffer springs, and make sure you have the setup that will be ideal for your gun.

AR-15 Buffers and Buffer Springs – What Does the Buffer System Consist of?

The buffer system in an AR consists of three main components: the buffer itself, a buffer spring, and a receiver extension (aka the buffer tube) to house it. Additionally, a buffer retainer pin and spring are part of the system, but are not essential for operation. They merely keep the buffer in place when the receivers are separated.

AR-15 buffers comes in a few different weights and lengths. A standard carbine buffer should weigh 2.9 ounces. Moving up in weight, an H buffer, or Heavy Buffer, is nearly a full ounce heavier at 3.8 ounces. The H2 buffer has a slight variance depending on the manufacturer, but should be 4.6 to 4.7 ounces. An H3 buffer similarly should be between 5.4 and 5.5 ounces depending on the manufacturer. Finally, a Rifle buffer should weigh 5.1 to 5.3 ounces and is noticeably longer than the carbine varieties.

Moving on to springs…Standard buffer springs come in two types, Carbine and Rifle. Carbine springs should be between 10.0625 inches and 11.25 inches in length, with longer springs offering more return power.

AR-15 Buffers and Buffer Springs – What Does the Buffer System Do?

The buffer system’s primary function is in cycling the bolt carrier group when the gun is fired. The proper buffer set up for a gun can aid in reducing recoil, smoothing out the action of cycling the gun, and making it more enjoyable to shoot.

So why are there so many options for buffers and springs?

As stated previously, many variables affect which buffer is the perfect choice. The prize that everyone is chasing after is the heaviest buffer that can be used while the gun still cycles completely, extracts and ejects properly, and chambers the next round in the magazine. Heavier buffers take more energy to move rearward when compressed and use that energy much faster, slowing down more rapidly than lighter options. As a result, they will feel “smoother” when the gun is cycling and reduce the shooter’s felt recoil.

So what determines which buffer is ideal? That depends entirely on your setup. Factors such as barrel length, gas system length, gas port size, the caliber of the gun, whether or not the gun is suppressed, and the mass of your bolt carrier group all directly impact how heavy a buffer you need. If you go too heavy, the gun will short stroke, causing it to not fully cycle. Go too light, and you run the risk of failure to feed as the bolt carrier races over the magazine before the next round is pushed up.

There are a variety of aftermarket parts for buffer systems that can be hugely beneficial to the end-user. Aftermarket buffers, aftermarket springs, and complete systems all have their place. I’ll go into a bit of detail on various aftermarket parts, but as always, you need to research what will be best for you before slapping it in your gun and hoping for the best.

In terms of aftermarket buffers, anything that didn’t come with your gun is considered aftermarket. Typically an AR-15 will come with a carbine buffer. Many shooters may find increasing weight will be beneficial, especially if they are shooting suppressed. There are also configurable buffers that come with different weights and spacers and are designed for the shooter to swap things around as needed.

These are known as adjustable buffers, and if done right, can be great. Sadly at the time of this writing, there aren’t any on the market I personally find to be consistent enough to point out, and generally, a shooter is better served to buy the proper setup from the get-go. I’ll cover examples of different setups in just a bit. 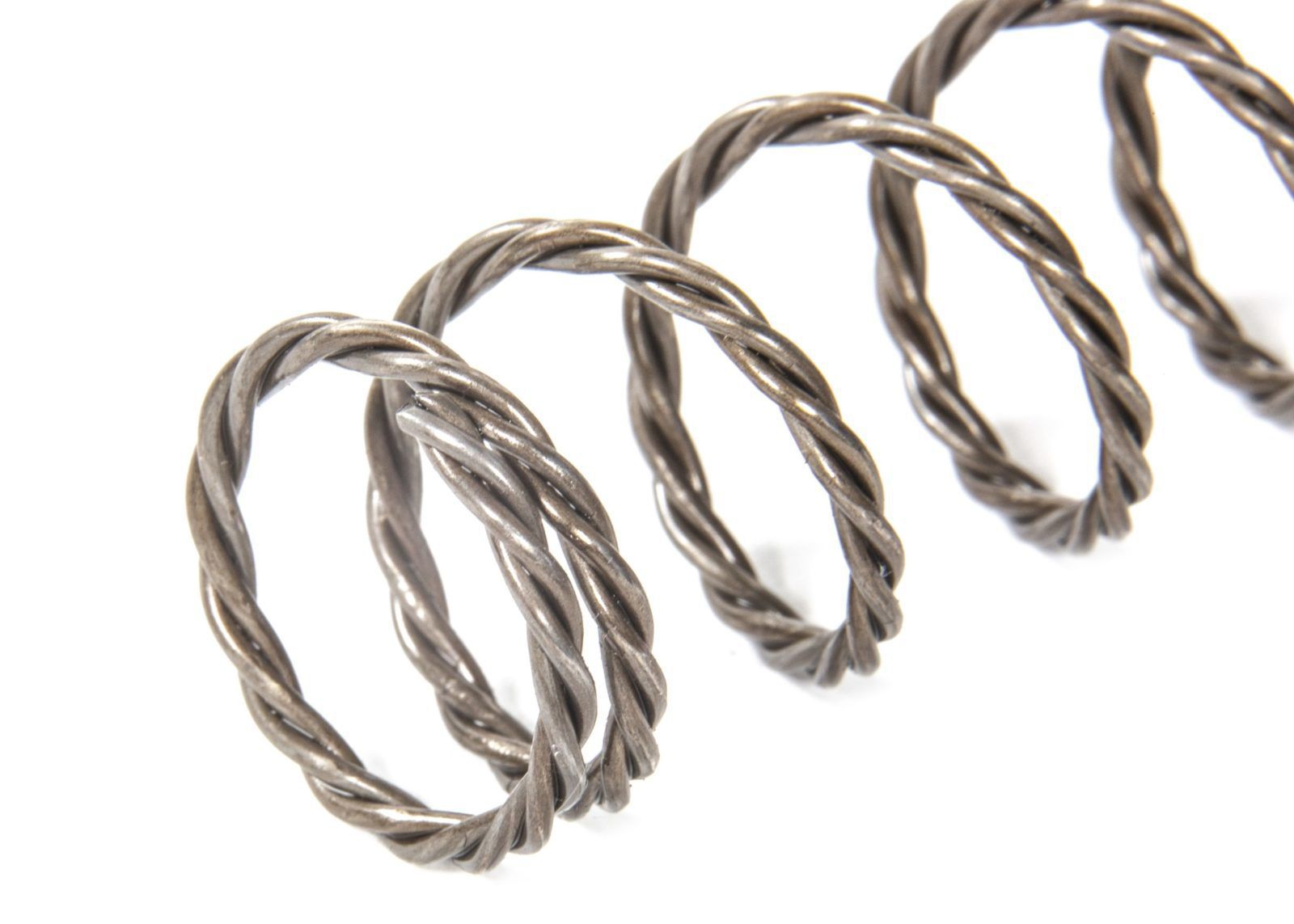 25.00
at AR15Discounts.com
Prices accurate at time of writing
View Details

Aftermarket springs have three main companies offering them, each with their own unique take. First up is the Geissele Super 42 spring. It is a three-wire braided spring that averages 15% stronger return average over an ordinary spring and is designed to absorb the energy and act as a dampener by allowing each of the three-wire springs to flex independently of each other.

One thing to note, Geissele does not recommend this spring for use with 300 Blackout subsonic ammo, as the spring is too strong to allow for functioning.

Next is the Tubb Precision Flat Wire Buffer Springs. These springs are made from high-quality stainless steel and boast an impressive 500,000 cycle rating. The nature of their construction allows for the same power as “extra power” conventional springs, but they are lighter and made from higher quality materials that are not temperature sensitive. Tubbs also claims that their springs allow for a bit more pressure build as the bolt will stay locked longer, allowing for slightly higher velocities out of your rounds.

The final aftermarket springs to look at are the Sprinco springs. Sprinco springs are color-coded by strength rating (from reduced power to extra power), are rated for hundreds of thousands of cyclic compressions, and offer increased lock time.

The Sprinco springs are not temperature-sensitive, and there is an option to cryogenically process the springs for even more performance life. The primary purpose of the Sprinco springs is the consistency they provide throughout the cycling of the spring, which significantly reduces spring-induced malfunctions.

One aftermarket buffer system that is worth looking at is the VLTOR A5 buffer system. It is a proprietary receiver extension, proprietary buffer, and a rifle length spring all used together to reduce felt recoil for the shooter, offer more consistent cycling of the buffer system, and a smoother cycle overall. Check out this article where Nick Wantland of VLTOR explains it in more depth. 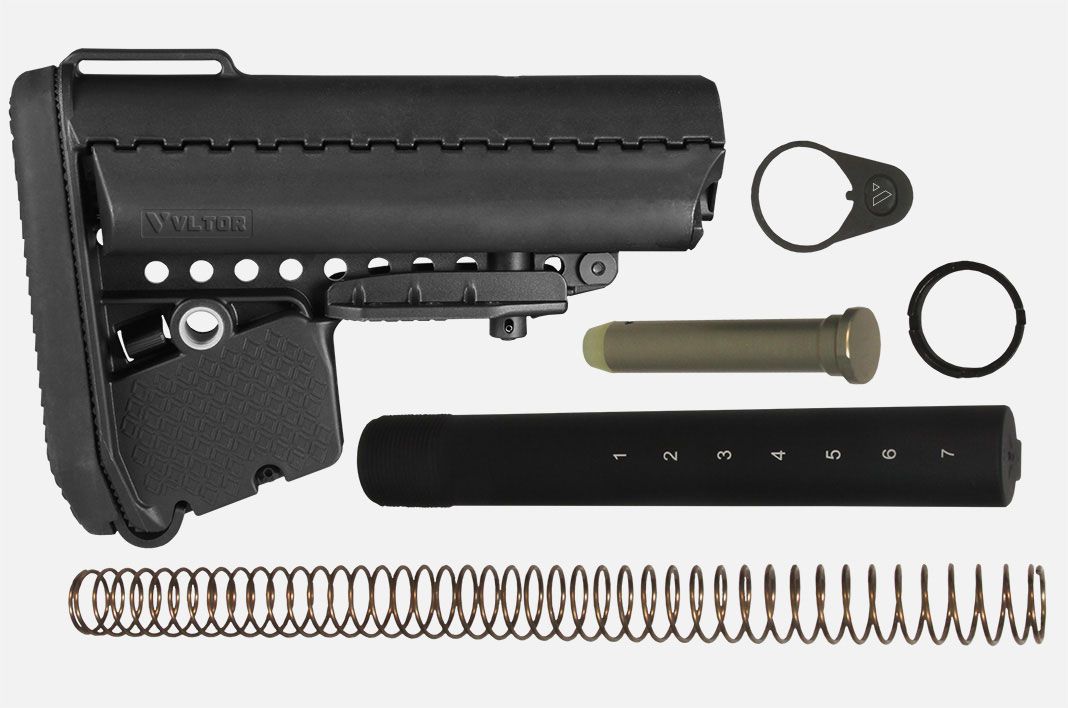 193.46
at AR15Discounts.com
Prices accurate at time of writing
View Details

Before giving examples of setups that should run properly, I need to preface it with a warning. These are the only examples that I have shot and been successful with. I am not telling you that every barrel length of a certain size will work well with an individual buffer. Instead, please think of these as starting points for your research. These are tools to aid you in tuning your gun, as there are no absolutes.

For shorter barreled guns, like 9″ 300 Blackouts up to 11.5″ 5.56 guns, H or H2 buffers will see a lot of use. H2 with a Sprinco blue spring functions beautifully in my 300 Blackout with a Faxon 9″ gunner barrel with pistol gas, a Sons of Liberty Gunworks bolt carrier group, whether I run it suppressed (with a Silencerco Omega 300) or without the suppressor.

If you are running a shorter barrel, there is a bit more violent extraction, so the heavier buffer will help offset that. Adding a suppressor to the mix means you want a slightly heavier buffer still, which is why I stepped up to the H2.

For bigger bore guns like .458 Socom, .450 Bushmaster, 50 Beowulf, an H3 buffer is a solid option to consider. The pressures these rounds achieve can cause the guns to cycle too quickly without the added weight to the buffer. Throwing a Tubb flat wire or a Sprinco Extra Power spring to reduce cyclic speed even further will help reduce the recoil some and allow for a slight nudge in velocity.

For my 11.5″ SBR, I found the Vltor A5 system with an A5H2 buffer to be ideal for shooting it with or without a suppressor on it. I have a Centurion 11.5″ carbine length gassed barrel with an LMT Enhanced bolt carrier group with that A5H2, and it is probably one of the softest shooting rifles I’ve touched.

I often hear people talk about “important” parts of the rifle that you need to focus on, and rarely is the buffer system included in that list. Without a proper buffer setup, your gun isn’t going to function at its peak of performance, if it functions at all. Many factors can go into tuning your buffer system, and all need to be accounted for to make a proper selection.

Write out a list of what barrel you plan to use, what the gas port is for it, what length gas it has, what bolt carrier you are going to run, and what caliber you’ll be shooting, and then ask for informed help from others if you aren’t sure.

There are many resources out there to help make the best choice you can, and if nothing else, reach out to reputable companies and ask how they set up their rifles for use under similar conditions. Do yourself the service of researching what will work best for you, and if you still can’t find the answer, post a comment here, and I’ll do my best to get you on track.

Todd is a gunsmith based out of Las Vegas, Nevada. After receiving his degree from Sonoran Desert Institute, Todd has spent his time building and maintaining a variety of machine guns and product testing for various companies. His main focus is expanding his knowledge on the AR-15 platform and helping bring better quality products to the market for end-users to enjoy.

Discount Code: FCDFRIDAY
Get it at AR15Discounts.com