With the arrival of a new JP Silent Captured Spring designed to work with the LAW Tactical Folding Stock Adapter, we decided to sit down with Adam Burt, General Manager of JP Enterprises, Inc. to learn more about the collaboration, how it came about, and what shooters can expect when they pair these two innovative parts together.

Q: Adam, can you discuss where this idea to collaborate with LAW Tactical came from? To me, it was one of those things I didn’t realize I wanted until I learned the two individual components did not work together.

Adam Burt – JP Enterprises, Inc. – It came about through customer requests. We had dozens and dozens of requests asking if we had a compatible Silent Captured Spring to pair with the LAW Tactical Folding Stock Adapter. It got to the point where we got sick of saying “no.”

The LAW Folder is an incredibly popular product, and for a good reason. It offers an exceptionally unique folding option to a market that was ready for something like that. However, with the JP Silent Captured Spring, the LAW mating components were not compatible. This was because the Silent Capture Spring has a guide rod that has to protrude through and into the carrier’s tail.

So, we were introduced to the guys from LAW Tactical via one of our pro shooters. It turns out that they were getting the same questions about compatibility that we were getting. We had a moment where we realized that we needed to collaborate and get something out on the market. I know there had been an adapter prior. Still, we knew we needed to develop something that was better, safe, reliable, and jointly developed.

It ended up taking us several months and many different prototypes to figure out what we needed to do on our end, and what could be done on the carrier extension side for the LAW Adapter to work. After lots and lots of high round count testing and multiple iterations, the end product is a beautiful marriage of two extremely sought-after products on the market.

It has been an excellent, symbiotic relationship with the folks from LAW Tactical, especially on the design and engineering side. They provided a lot of input, helped test it at every step along the way, and have just been a tremendous collaborative partner. 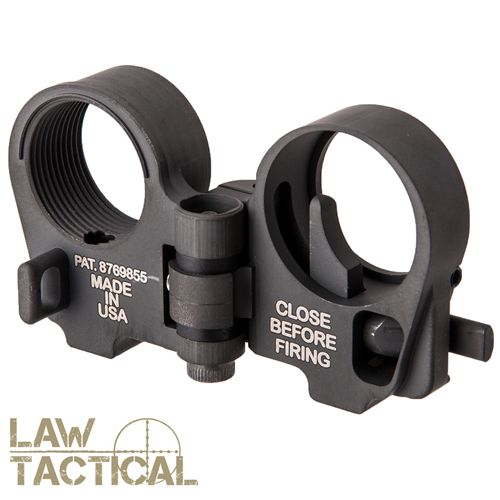 $269.99
at Brownells
Prices accurate at time of writing
View Details

Q: Our readers may be familiar with the LAW Tactical Folding Stock Adapter, but they may not know about the JP Silent Captured Spring. Can you provide some details on what that is for those who may not know?

Adam Burt – JP Enterprises, Inc. – To start at the inception, I would describe us as a premium rifle and rifle parts manufacturing company, and years ago, one of the idiosyncrasies of a traditional AR-15 is that when you charge the weapon, you hear an ugly “cheese grater” sound where the spring rubs against the inside of the buffer tube. Our founder wanted to eliminate that. His idea was simply to remove that sound, and that cheese grater feel out of the equation.

We went through several designs and spent a lot of time attacking this “problem.” As we went through the process, we also wanted to bring an adjustable solution to the table. So not only would the Silent Captured Spring eliminate the sound, but you could completely adjust the buffering mass components, along with the spring weight.

Being a captured system, the spring simply glides across a polished rod, and it is adjustable so that if a shooter wants to tune the recoil impulse and change the character of the weapon to their particular shooting style, they can do that by way of adjusting tungsten and steel masses…there are three ring weights that go along the slider. They can remove those, or they can swap them out, so there is an adjustable nature to both the mass and the spring weights. For instance, you can have reduced power spring rates if you are running something like a Low-Mass Carrier, and you want a bias towards a very low-recoil rifle.

Q: Can you discuss reliability of something like this?

Adam Burt – JP Enterprises, Inc. – From a reliability aspect, I understand there is instant hesitation to deviate from the norm. The legacy-style spring and buffer system has been around for 50-60 years…Naturally, the market has an “if it ain’t broke, don’t fix it” mentality.

That’s just not us. We’re a concept company focused exclusively on innovation and bringing something new to the table. That said, I think as far as reliability, our track record speaks for itself. We have tens of thousands of these out on the market. At a minimum, the reliability is as good…but it is often much better because you can tune particular elements to your rifle.

For instance, if you have a short barrel and you are running suppressed, you can add more buffering mass to ensure that bolt bounce is mitigated…The custom tuning idea is same with spring weights. You can add a heavier spring if your rifle needs it, just to add additional reliability to the system. For customers, you can buy the configuration you need so that it will work for you right out of the box, or you can also mix and match and purchase that way.

Getting back to reliability, I’d also remind your readers that we use higher quality components, and they are assembled by very adept technicians in a controlled environment. You’re certainly not buying mass-produced, many times foreign components of questionable quality with questionable materials. It’s done by us here at JP, and we do it the right way. We control the assembly and the materials used, as well.

Q: Some would say that adding complexity is not the best approach. Can you address that in regards to the Silent Captured Spring?

Adam Burt – JP Enterprises, Inc. – With the JP Silent Captured Spring, we’re taking something that we know works, looking at it, and seeing that there might actually be room for improvement. As to the notion of complexity, it’s the same principles, just constructed in a different manner. There’s a buffering mass and a spring, it’s simply built differently.

Q: Is there anything else that people should know?

Adam Burt – JP Enterprises, Inc. – We have a flow chart on our web site that will point the user to the specific model that will suit their application or rifle configuration. There is no one-size-fits-all JP Silent Capture Spring. There are a couple of different variants, and I would ask your readers to consult that flow chart before picking the model they think might be right for them. 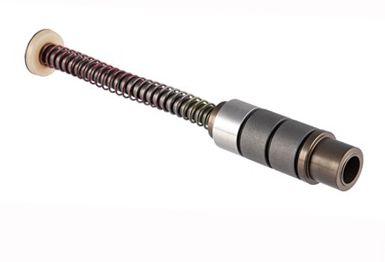 $244.95
at Brownells
Prices accurate at time of writing
View Details

Q: I ended up selecting the H2 version of the Silent Captured Spring in my lower, thinking it would work across a wide variety of my uppers. I’d imagine many are in a similar position. Is there any real downside of going with the H2 version?

Adam Burt – JP Enterprises, Inc. – To make a long and complex story short, there is no downside other than because you have more buffering mass, you have more reciprocating mass. So to the advanced user who is trying to bias the rifle towards a low recoil application, there is a consequence that it will recoil slightly harder than a standard version, just because it has more mass going back and forth.

To be completely candid, most shooters will not notice a difference. While there is no one-size-fits-all, for 95 percent of shooters, the H2 is probably what they want. Just make sure to refer to the chart just to be safe.