With the impending launch of the What Would Stoner Do 2020 rifle (WWSD 2020), we reached out to InRange TV’s Karl Kasarda to learn a bit more about the project and what to expect once the rifle and components launch over at Brownells.

In a nutshell, the basic premise of the What Would Stoner Do 2020 (WWSD) is to revisit the AR-15 with the original design goals of Eugene Stoner and L. James Sullivan…To bring back the original lightweight, handy, reliable, accurate carbine…using modern materials, omitting certain parts, and making it ambidextrous.

Q: Can we start with a bit of a background on how InRange TV came about?

Karl Kasarda – InRange is a history and culture channel where the backbone of it is based on firearms. It started many years ago when I saw Ian McCollum attempting to use a replica FG-42 in a 3-gun match.  I contacted him and told him he should shoot my match which was at that time 2-Gun, but would later become known as Desert Brutality.

He came out and shot the match and we became friends and it became a spin-off of what he was doing with Forgotten Weapons but now with a greater appreciation towards modern gear equipment and application of historic guns and equipment under the clock.

Q: I’d like to start with your opinion on why do you think the AR has had such a long lifespan?

Karl Kasarda – I think they pretty much hit all of the sweet spots.  Firearms development is interesting because it’s always a bit of a give and take.  You try to find a balance.  You have a goal and then you have to try to find a balance to get to those goals. You always have to exclude one thing for another.

Stoner really was a visionary.  He was looking ahead and using the aerospace technology in the firearms industry.  He was really one of the first pioneers to do that.  That meant bringing in new and modern materials at the time, like aluminum for example.

At that point, it was still based around the now obsolescent, I will argue, .308 cartridge. The world had now seen the power and viability of intermediate cartridges.  It fell to Sullivan and others to then downsize the AR-10 into the AR-15, which is really when the gun came into its own.

You have something that maintains an almost perfect balance of weight to viability on the battlefield, the ability to carry large amounts of ammunition, as well as the Stoner design of the rotating, locking lug bolt system and semi-DI system provided something that was very reliable as well as very accurate. I think what happened is they hit all of those sweet spots in just a perfect balance.

The gun in its original incarnation was light, was reliable (until people messed with things and ruined that) and the cartridge is sufficient with the right barrel length to do the job.  So, when they hit all of those things together, there has not been anything better since.

Q: I’ve heard you say that perhaps the AR “lost its soul” somewhere along the way.  Can you talk about what you mean by that?

Karl Kasarda – I do think it lost its soul.  The original version of the gun, as it was designed by Stoner, Sullivan, and others was to make the most lightweight, capable military rifle that had ever been on this earth, and they succeeded in many ways with the .308 incarnation with the AR-10, but then they exceeded and surpassed that with the 5.56 chambered AR-15.

When the gun was originally issued in it’s AR-15 form, it was lightweight, it was reliable, it was accurate.  It did all of those things very well with very minimal recoil.  As time moved on, and as Americans are inclined to do, they decided to turn what was a lightweight, handy, fighting rifle into a target rifle.

“They absolutely transformed the AR-15 into a target rifle…”

One deviation is when the Marine Corps went to the M16A2 with a heavy barrel and essentially a target-type sighting system, with the idea of using it for better scores on their known-distance qualification range.  They absolutely turned the AR-15 into a target rifle…and then of course, other competitors took it even further.  In the process of doing that , they added a lot of weight, an overly complex sighting system, the forward assist got added, and all of those things made what was lightweight, handy gun to into guns that were as heavy as guns that were firing .308 when they started the AR project.

Today, when you pick up an original AR and compare it to what we are lugging around today, even in the M4 incarnation, it no way has the same handling attributes as when Stoner and Sullivan designed the gun. 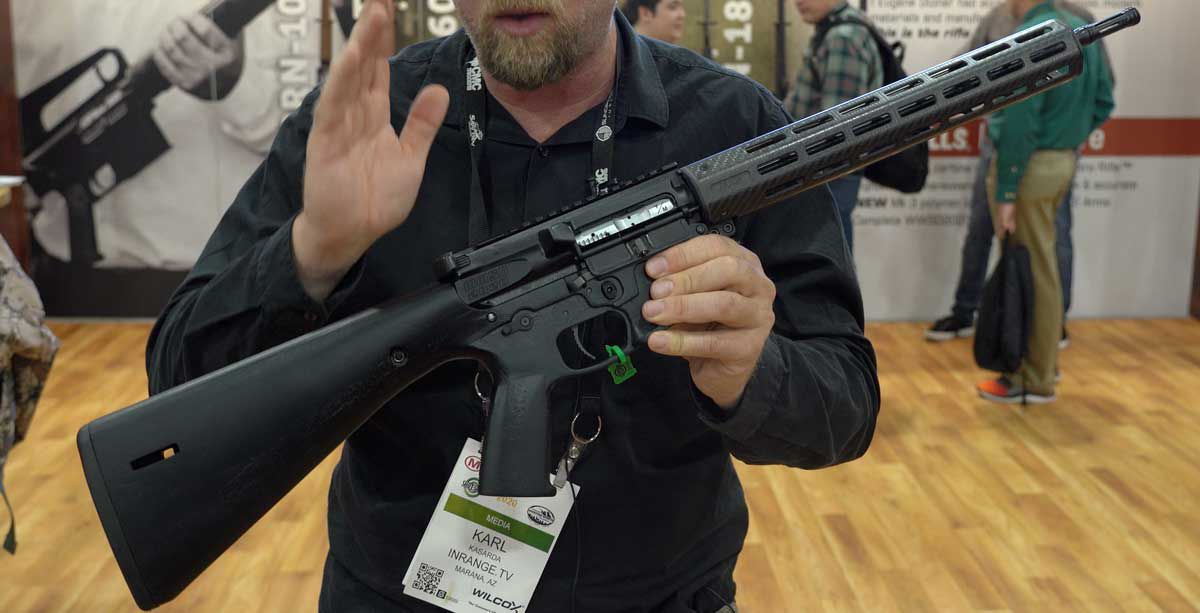 $1699.99
at Brownells
Prices accurate at time of writing
View Details

Q:  Can you talk about how the WWSD 2020 project came about?

Karl Kasarda – I picked up an old SP1 and playing with it I thought, “My gosh, what has gone wrong with the AR-15?”  Keep in mind, I come from a background where I shot NRA High Power and Camp Perry, and I have in my collection a competitive, high power AR-15 that no joke weighs 20 pounds. It is a fantastic target rifle but it is not something you’d want to carry farther than to the target line and back.

When you use those original guns, you realize they were on to something that got lost along the way.  So what we wanted to do was re-approach the design or really the build of the AR-15 with the mindset that Stoner had in the 1950s.

We asked…what are the most modern materials and forward leaning things on the market, that when combined, bring back the spirit and soul of the AR-15 when it was originally designed? In doing that, you could say it was a “retro” mindset but with a modern materials focus.

I strongly believe that if Stoner was designing a rifle today, he would be looking at the materials that we were looking at and that we did implement in the our “What Would Stoner Do?” build….polymer, carbon fiber, etc.

Karl Kasarda – There are a number of polymer lowers on the market. To be completely, bluntly honest…the majority of them are junk. You can’t take a design that was designed around aluminum, and then turn it into another material like polymer, and expect it to behave the same way.  It will not…they are extremely fragile and weak.

They tend to break at the buffer tube assembly mating point, but they also break in other regions. Our lower in the WWSD is designed around what polymer is good at, and what polymer is not good at. As a result, it is very reliable, strong and durable. 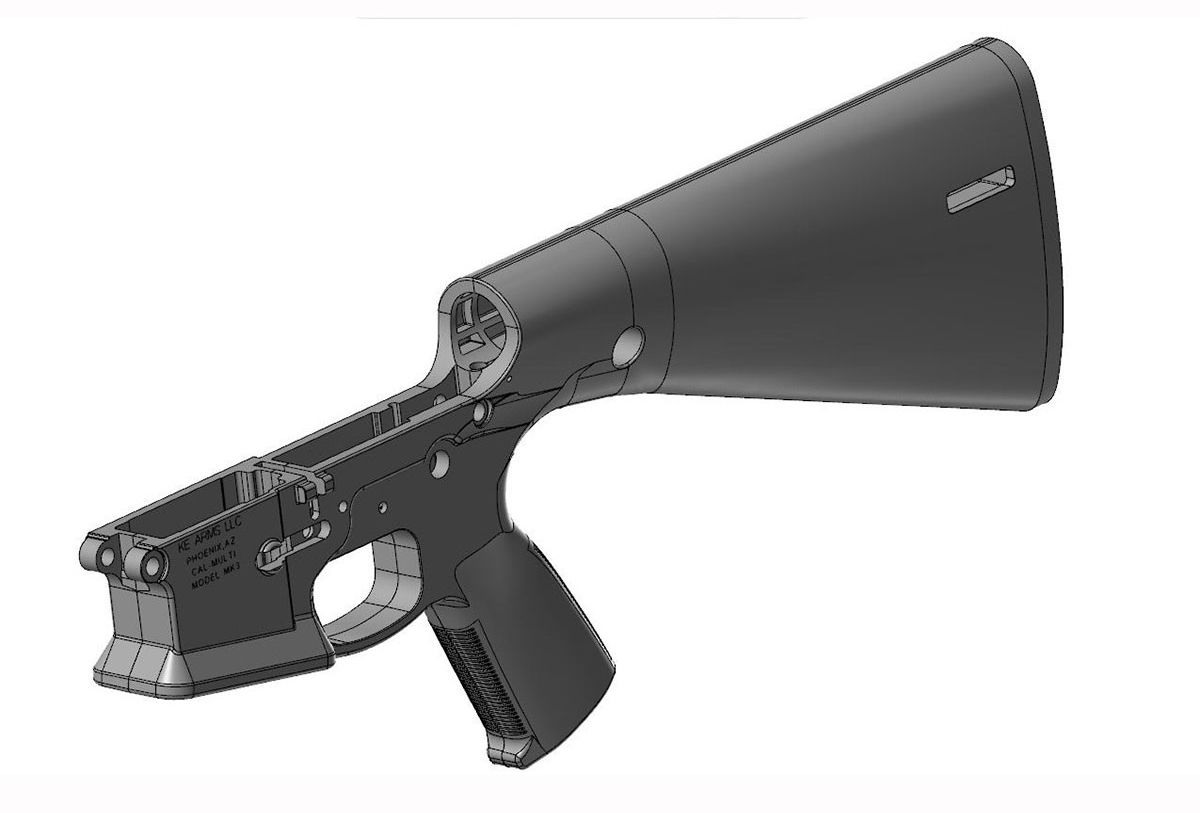 $359.99
at Brownells
Prices accurate at time of writing
View Details

Karl Kasarda – One of the issues with the original AR-15 was that when it got hot, the zero shifted.  The answer that people migrated to over time was to make the barrel thicker and heavier.  But with the manufacturing capabilities and stress relieving that we have now, a thinner barrel is actually viable. Pencil barrels now are different from pencil barrels back then.  They don’t have the same problems.  Having a pencil barrel from Faxon in the WWSD 2020 is absolutely essential to the overall balance of the gun.

In terms of the carbon fiber handguard, if you can have a free floated barrel, there’s no reason not to.  When looking at the most modern materials on the market, we found that Faxon, again was forward leaning, and was using carbon fiber free-float tubes.  We experimented with a number of different tubes, but the one from Faxon had a lot of benefits.   It was lightweight.  It was extremely durable, and we have seen them take abuse that we did not expect that they could.  In some ways, they are more durable than aluminum equivalents, as aluminum can bend, fold in, and get messed up. With carbon fiber, it’s either totally intact or totally broken…and it does not get broken easily. The other thing we found that was surprising is that carbon fiber does a great job of not absorbing heat from the gas tube.

Q:   Can you talk about the decision to eliminate the forward assist on the WWSD 2020?

Karl Kasarda – What the forward assist tends to do is add weight and and mass, and if something has gone wrong with a bad round, or if your system is fouled enough that it is not chambering a round, more often than not, smashing the forward assist button just makes the problem far worse.  You are much better off clearing the round, figuring out why it didn’t chamber the round, and then chambering a clean, decent round into the system.  Stoner believed it…I believe it.  I don’t think it should be on the gun.   It is just weight with just no added benefit, only potential detriment.

Karl Kasarda – We have a completely self-contained buffer system. We are going to be changing it slightly for the WWSD 2020 build versus our 2017 build.  When you have it completely contained, you get a few benefits from that.  One, you don’t need a buffer detent.  You can omit it entirely.  Buffer detents break and they do jam up guns.  The other benefit is you can remove the entire buffer system out of the gun and you don’t have to worry about the buffer and a loose spring. It’s just one component that you can take in and out. It’s also a smoother recoil impulse…which is something you really need to fire in order to feel.  You have to experience it to understand it.

Q:  Can you talk about the partnership with Brownells?

Karl Kasarda – We’ve worked with Brownells in the past, and I think they appreciated the retro mindset but the modern build that we were doing with the WWSD 2020.  They are a really interesting company.  They are bringing very interesting things to the market.

Some of it is retro, and some of it is pushing the industry forward.  I think the WWSD 2020 is one example of that. Brownells has really become more than just a parts company and become a very forward-leaning firearms company as well. They came to us and wanted to know if we wanted to work with them on the WWSD, but for 2020…

In tandem with the MK3 Lower being brought to the market through KE Arms, in tandem with us revisiting what the WWSD build should be, three years after we did it in 2017,  that’s going to turn into an even better rifle than we had before.  We’ll be working with them to bring both the lower to market, as well as a complete rifle.   So, if you don’t want to DIY it, you can buy a complete gun.

Just discovered your channel and find it very interesting.