Regarding the best AR-15 upper receivers, often times when I hear people talking about building the AR15s a common sentiment I see is “I’ll spend the money on the bolt carrier group and barrel, receivers are just receivers.”  This is sadly the thought process of many people out there, and unfortunately, it couldn’t be further from the truth.  The upper receiver of the rifle is responsible for handling several major things during building and cycling, but not all receivers are created equally.

Before we get into some receivers that are worth researching more, first we have to discuss what the upper receiver does and the major types you’ll find.  The upper receiver is the part that mates to the lower receiver, holds the charging handle, bolt carrier group, forward assists, ejection port, and what the barrel and handguard are attached to.  In addition, some sort of sight is going to rest on the upper receiver.

During the cycle of operations, the upper receiver houses several components that are responsible for handling the miniature explosions firing a gun creates.  The barrel is fixed to the upper receiver via a barrel nut (that should be properly torqued with Aeroshell 33MS applied on the threads).

The upper will also house the bolt-carrier group, responsible for feeding, extracting, ejecting, as well as actually striking the primer on the round when fired.  The gas-system (or piston if you went that route) is also at least partially contained in your upper.  With all of those parts playing such critical roles, do you really want to find the cheapest thing you can to house everything and handle their operations?

As for types of upper receivers, there are two main ways to make an upper – billet or forged.  From there, you have a flat top (with a Picatinny rail), carry handle, or monolithic.  The debate between billet or forged has been raging for years, and is going to continue on as long as they are both options.

Billet uppers are made from a single piece of metal stock and are entirely machined to completion from that stock.  Forged receivers are beaten to shape, which will alter the composition of the metal itself. The roughly shaped piece is then completed via machining and is thought to be stronger than the billet counterpart.

Each of the different subtypes will have different advantages and weaknesses, so do your homework, determine the purpose of your rifle, and then match that with what will work best.  Flat-top uppers are generally the most common today.  These are upper receivers with a Picatinny rail on top that many people associate with the modern variation of the upper receiver.  They are a jack of all trades, allowing for easy customization, but not offering any inherent advantage (other than ease of changing them) on their own.

72.00
at AR15Discounts.com
Prices accurate at time of writing
View Details

Carry handle variants lack the Picatinny rail, replacing it with a handle used for carrying the rifle.  These were more common in the past, especially during the Vietnam-era, though retro rifles are making a strong comeback these days.  Carry handle uppers will sit optics much higher up than a flat-top and may take some getting used to when shooting them.  Many carrying handles will have some form of iron sight built into them though.

$139.95
at AR15Discounts.com
Prices accurate at time of writing
View Details

Monolithic uppers aren’t produced in nearly the same volume as either of the other options.  Here, the upper receiver and handguard are actually one piece, creating an extremely durable one-piece configuration.  The two drawbacks to monolithic uppers are the weight that they usually possess, as well as a difference in barrel installation that not everyone is completely comfortable with (this can vary from one manufacturer to the next, some are more difficult to install than others).

When choosing an upper receiver, you want to focus on quality.  If a company skips quality control or quality assurance steps, you can be left with an upper that is not only inoperable but potentially dangerous.  Tooling marks left in the receiver can inhibit the bolt-carrier from moving.  Improperly placed gas tube holes can leave a gun barely functional.  Barrel extension holes that are oversized will allow for wobble in barrel mating, adding stress to a barrel nut or worse.  Don’t let a company use you, the consumer, as their quality control in the name of shaving off cost for cheaper prices.

Their M4E1 Enhanced upper is more angular machining combined with a mount for Aero handguard (as well as most BAR handguards) forged onto the receiver. This is the closest you will come to a hybrid between a monolithic upper and a forged.  Finally, Aero offers an M4E1 threaded receiver, that has the same body profile as the enhanced but is threaded to accept any standard AR-15 barrel nut. 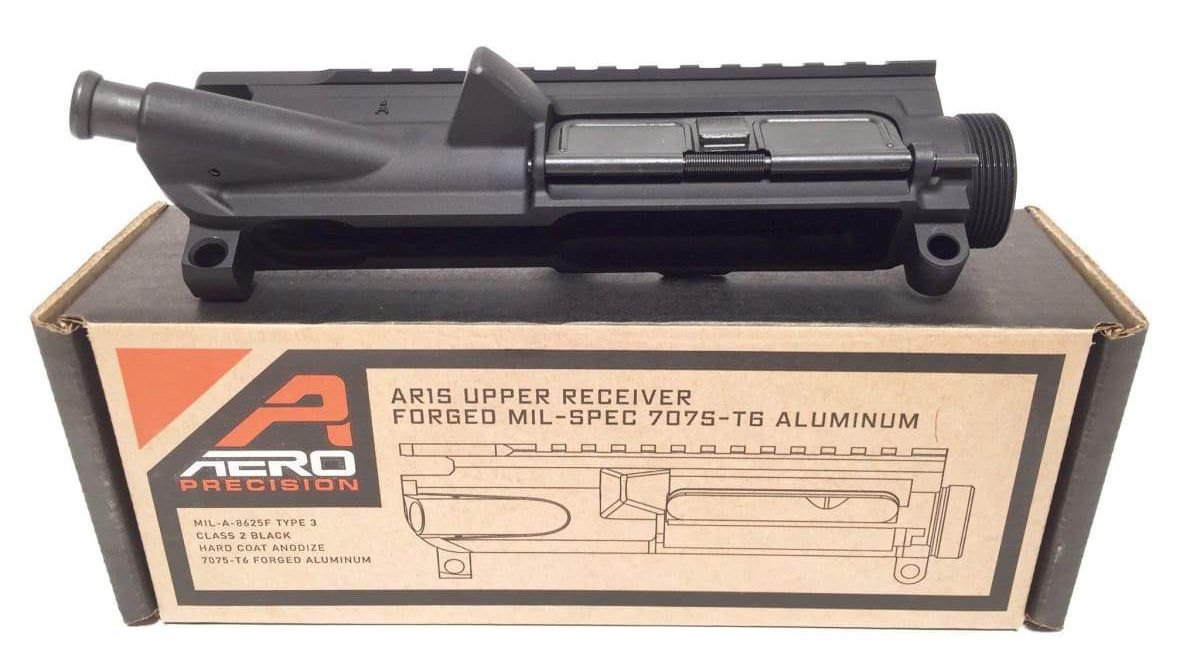 $79.95
at AR15Discounts.com
Prices accurate at time of writing
View Details

The BCM M4 upper does one thing differently than a TDP upper that really makes it stand out. The area on the upper where the barrel extension installs is slightly undersized to allow for a tighter fit to the barrel.  Thermal fitting is the most recommended method of installing a barrel into one of these uppers.  BCM set themselves apart with this tight fit, as it is said to help aid in both stability and accuracy when the thermal fitting is done properly.

$135.95
at AR15Discounts.com
Prices accurate at time of writing
View Details

Forward Controls Design is a company that is hellbent on offering a quality of life improvement with every part they manufacture and the URF-B v2 is no different.  This billet upper features two noticeable differences from a standard A3 style upper, both designed to improve function for the end-user.  First, small relief cuts were made on the top rail before Picatinny sections start, aimed at allowing easier access to flip back up sights.

Additionally, relief cuts were made on the top of the forward assist housing so ambidextrous charging handle users will have an easier time of charging the gun from the right side.  These reliefs allow more finger purchase on the charging handle for easier function.

$187.15
at AR15Discounts.com
Prices accurate at time of writing
View Details

Both Zev Technologies and Grey Ghost Precision are producing some forged uppers that are worth looking into.  Tolerances from both companies are machined to tighter than TDP specs, holding at +/-.001” tolerances. These tighter dimensions help to reduce variances from other parts that directly translates into maintained accuracy as long as the human element is managed while shooting.

There are reasons Hodge Defense has a near-fanatical following.  Simply put, they hold their products to exacting standards so they will function in the harshest environments.  The Hodge forged upper is also held to within +.001” tolerances, and is designed to interact flawlessly with the Hodge Defense rails (wedge, pinch or S-lock).  Like the BCM upper, Hodge recommends thermal fitting for barrel extension installs. 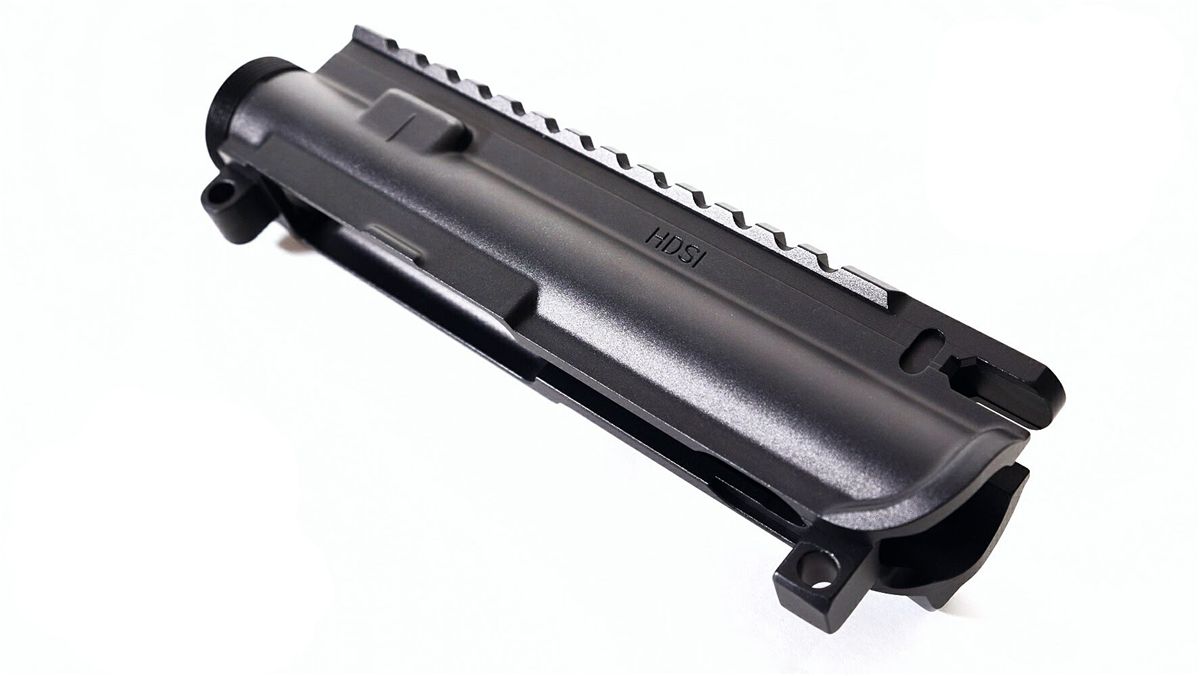 VLTOR has two uppers that stand out from the competition.  The MUR (Modular Upper Receiver) takes TDP receivers to a new standard.  It combines a thicker wall for rigidity with double heat treating and cryogenic treatment.  This makes the upper even stronger than a typical forged receiver and increases accuracy (as well as reducing wear on other components that interact with the receiver). 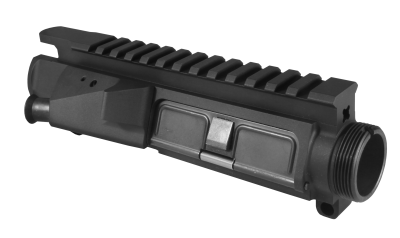 199.95
at AR15Discounts.com
Prices accurate at time of writing
View Details

The second receiver that VLTOR made was the VIS Gen 1, which is sadly no longer in production.  If you can find one of these unicorns, it set the standard for monolithic uppers for many years.  It featured a unique barrel nut design integrated into the attached handguard and is one of the most durable rails on the planet.

LMT offers several flavors of monolithic uppers for consumers to choose from.  The CSW is designed to have a large inner diameter of the handguard for nesting suppressors.  The CQB is a quad-rail mono, while the MLC is the M-LOK variant. Regardless of which version you prefer, each one is precision machined for tight tolerances, legendary durability and rigidity, and a barrel changing system that leaves little left to be desired.

Best AR-15 Upper Receivers – Do Your OWN Homework

There are many different upper receivers to choose from in today’s market.  Be it a complete upper with barrel, gas system, and bolt-carrier group, or a stripped upper for a consumer to customize, there are many options available.

Given the responsibilities the upper receiver has, do your homework and find the best AR-15 upper receiver that will fit your intended purpose, your budget (which may mean saving a bit longer to get the proper component), and the desired look. The companies mentioned here are only a small sampling of those that are putting out quality components, so use them as your starting point to look for what will serve you best.

Todd Gimian is a gunsmith based out of Las Vegas, Nevada. After receiving his degree from Sonoran Desert Institute, Todd has spent his time building and maintaining a variety of machine guns and product testing for various companies. His main focus is expanding his knowledge on the AR-15 platform and helping bring better quality products to the market for end-users to enjoy.