Reptilia has quietly become a go-to source for hard-use accessories for the AR platform and more. An American design and manufacturing company founded with the mission of developing solutions for those fighting for our freedom, many consumers are learning that when it comes to quality, almost no one is doing it better. To learn more about the slow but steady rise of Reptilia, and what’s next for the company, we reached out to co-founder Nick Booras.

Q: Nick, can we start with an introduction and how Reptilia came about?

Nick Booras, Reptilia – My name is Nick Booras, and my business partner, Eric Burt, and I got our start in the industry around 2006/2007 at Magpul. I was doing marketing and graphic design, and Eric started as a research & development intern. The two of us grew through the ranks, and I handled military, international sales, and business development until around 2012. Eric went from intern to the number two running research and product development at Magpul by about 2011. After that, Eric went from Magpul to AAC (Advanced Armament) and helped Kevin Brittingham develop the Honey Badger and other things. That later became Remington. He left there and went to Crye Precision. There. he worked on the SIX12 Shotgun and a few other things.

As far as my career path, after Magpul, I found myself as a Vice President of SilencerCo and then proceeded on to be a Vice President position at Radian Weapons. Ultimately, he and I just got sick of working for other people and essentially building other people’s dreams. Instead, we decided to do something on our own. This is how Reptilia started.

Our focus was to do what we had always done…develop cool stuff, focused primarily on accessories…nothing serialized, meaning no suppressors, no guns. To us, ideally, our perfect product would be something guys who go to war would want. Whatever we made would have to be of that quality and have an absolute top-of-the-line fit and finish. That said, there are not enough guys like that out in the world to pay our bills.

Our goal then is to create something that those guys would want, but then the American gun owners like you and I would also buy a ton of. That allows us to reinvest that money into products for us and for those who would use it for a living. 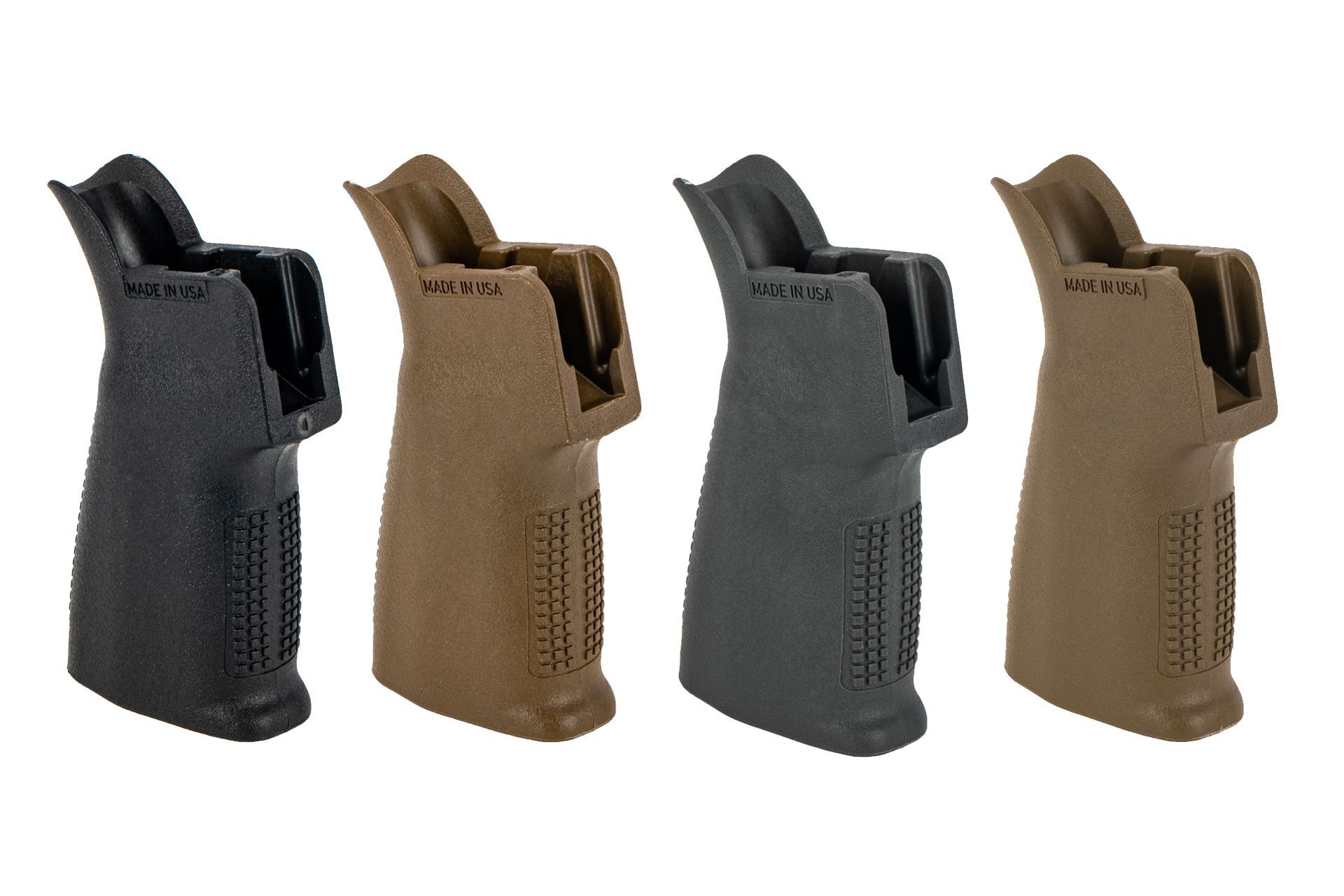 $17.96
at AR15Discounts.com
Prices accurate at time of writing
View Details

Q: Is it a case where yours is a company making a small amount of things but making sure you do things right, or is there more to it?

Nick Booras, Reptilia – If you look at the pace of product releases versus our company’s size, we are extremely fast in product development. The key is everything that we’ve been doing so far has resulted from a request from an end-user who needed to use it professionally.

For example, someone might come to us who has purchased a new optic, light, or laser that they need to mount on a specific platform, but they’ll only need 100 of them. They will ask us to assist them because we can be very fast when it comes to prototyping and actually delivering functional samples, and then the production run.

We certainly pride ourselves on quality. Many companies in our industry are interested in pure output and making the highest margin possible. If you look at some of the profit margins we have on our products, it will make you cringe because they are terrible (laughs). That said, the guys doing real work with these products, when they come to us, we can’t say no. We will never make anything that isn’t fit to be on duty.

Q: Can you talk about the benefits of being a small company, and how that allows you to be more nimble?

Nick Booras, Reptilia – Being a smaller company is interesting. I like the idea of going around a small room and asking each person around the table if they would personally buy a proposed product. If we go around the room and everyone there would want it, we would move forward.

This was not the case at someplace like Remington, where you could spend 75 percent of your time creating PowerPoints and Excel spreadsheets to try to justify products. Doing things this way makes it very difficult to get things done.

With Eric and I, if we have a small customer who needs something that would be a niche product, we can say “yes.” I do not have first to ask the CEO or the chief sales officer. I don’t have to get buy-in. Instead, I can say “yes” and help someone trusting us with the responsibility to make them a product they will go to war with or carry on duty every day. It’s incredibly humbling. I also don’t have to have the concern about making a bunch of money on it. Not only is that gratifying to be able to help, but it also makes what we do a lot of fun.

Q: Can you talk about the first product you did at Reptilia?

Nick Booras, Reptilia – The ROF is the first product that we did. It was designed to mount a Trijicon RMR on top of a 30mm Geissele Super Precision scope mount. It’s still successful today. In the competition world, it makes sense that if you are dialed up to 6x and engage a target that is closer in, you can use it to be faster.

A good explanation I had was a good friend who described an experience he had in Iraq. He said that he was dialed up to 8x on his scope, but he would have guys running from alley to alley across the road, and he couldn’t engage them fast enough with his 10x. He wanted an offset red dot for those closer in, faster targets. With Low Power Variable Optics becoming more popular, these mounts are something we are selling a lot of.

Q: Can you describe the business model as far as, do your machine the items yourself in-house, or do you work with partners?

Nick Booras, Reptilia – Our business model is similar to Magpul’s. We are a design and marketing house. Our core competencies are product development due to our relationships with end-users. We understand the end-user, sales channels, and product development and design. A core competency is certainly not manufacturing. We leave that to experts. What we do is design products in-house. We prototype them and test them. When they are ready to go into production, we contract that work out to someone who is actually a machine shop, injection molder, or a caster.

It’s one of those things where I have seen people try to go outside of what they are good at, and it rarely ends well. We understand that we are good at product design and development and decent at marketing, so that’s what we will keep in-house. We then let the experts in the manufacturing field do their thing. We are doing an office build-out right now, and we intend to bring more prototyping, like a few small machines, in-house. That said, we have no desire to get into manufacturing.

Q: Can you talk about the challenge of convincing a customer to go with your products over another company. It can be tricky when everything looks roughly similar…

Nick Booras, Reptilia – It’s hard. If you look back at the early days of Magpul. The company’s marketing was widely considered to be genius. I can tell you right now that we were not. I didn’t have any formal training. Nor did the CEO have any formal training. Yet, we were very successful. Now, fast forward 15 years or so. Marketing has progressed, and everyone out there now claims to be “the best.” You can be the worst pistol maker in the world or someone like Glock or H&K…they all have the same marketing, and it’s all good.

From a customer standpoint, it makes things very confusing. You can pay 100,000 dollars to do a video shoot in Africa where you shoot an elephant, or they can hire a bunch of Instagram influencers to do something in Wyoming. It all makes your product look good.

We don’t do that approach, which is somewhat fake. What we tend to rely on word-of-mouth. You see that with a lot of companies…Modlite, for instance. They don’t spend money trying to trick customers into believing they are the latest, greatest thing because they don’t have to. Their customers sing their praises for them. That’s where we are and where we want to remain. I don’t have to pay for some expensive photoshoot and hire someone to sell my stuff. Instead, our customers sell it for us.

Q: The product related to Reptilia I first learned about was your CQG Grip. Can you talk about how that came about?

Nick Booras, Reptilia – Eric was involved with the Honey Badger development program at AAC. The goal was to replace the MP5SD. During the design, they talked about doing a grip. Eric left AAC, and the Honey Badger ended up not winning the trial that it was designed for. The Sig MCX took over. We had a customer who was purchasing subcompact Sig Rattlers in 300 Blackout, and they wanted a grip with a more vertical angle.

They also requested something that would fill the hand a little bit better than the Magpul MOE-K grips. We worked with the end-user to develop something shorter, more compact and had a bit of a palm swell to be more comfortable and usable. Although it was designed for the Sig MCX/Rattler platform, it works very well on AR-15 pistols and short-barreled rifles.

Q: Can you talk about plans for the future?

Nick Booras, Reptilia – One of the interesting things about our industry is that Magpul is so dominant in the accessory world that many customers are now looking for an alternative. The problem is that a 600 dollar Springfield looks the same as a 3,000 dollar Noveske on the gun wall at the gun store because they both use the same Magpul furniture. So, some companies are looking for an alternative.

As you know, aesthetics can be challenging. I’m sure you companies that make products that are very high quality and functional, but very few companies also know how to make it look good. The reality of the American gun industry’s commercial side is that it has to look “cool.” It’s Barbie for men (laughs).  No one has executed on an accessory package very well…yet. It’s something we’re pushing towards.

Q: Nick, we really appreciate your time. Anything else you’d like to add?

Nick Booras, Reptilia – I guess I’d just like to let your readers who may not have heard of us that we’ve been around the block. Reptilia is not some two-bit operation that came out of nowhere. We’ve got 15 years each of experience doing this stuff, and our guiding philosophy is making true high-quality accessories. We try to hit a reasonable price point, but we are never going to sacrifice quality to make something cheap. We’re not that brand, and we never will be.

Discount Code: STOCKTOBER
Get it at AR15Discounts.com